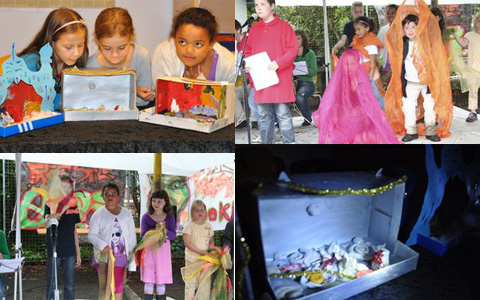 We make theatre from A-Z

From the 9th until the 17th July 2012 the topics stage, theatre, dance and music were presented in the project “We make theatre from A-Z” to 205 children from age 6-14 under an interdisciplinary approach and finally were implemented in a creative way in order to the individual interests of the participants. The different aspects of the project were divided and realized in the recreational facility for children and adolescents “Kamper 17” (musical & stage, 9 th until 13 th july) as well as in the Joachim-Neander Schule at the Rather Markt 2.

First of all the theatre history and various techniques of theatre productions were presented. Later a set decoration and stage modules were developed and implemented, an own storyboard was thought up and realized in a straight theatre. Finally a musical was concepted. In a final performance including the self-made set decoration and accompanied by a band the children presented what they had learned.

During the project an increasing self-confidence of the children and often a self-initiated willing to take responsibility could be observed. Moreover the participants developed communicative skills, learned to work in a team as well as artisanal techniques and artistic forms of expression.